Those of you who've been following my blog for some time know that I love to experiment.

A while back, I had attempted an in-place upgrade within the Hyperion / Oracle EPM series after applying one of the quarterly Oracle Critical Patch Updates.  I have at least 2 posts here on that very topic: my original findings, and a 2nd post offering a solution shared by one of our frequent commenters here, Deezel.

The README for EPM 11.2.6.0, the newest EPM Release as of this writing, claims to automatically roll back Middleware patches are part of the in-place upgrade process.  I decided to roll the dice without first applying the solution linked above.  Mostly, I was just curious to see what would happen! 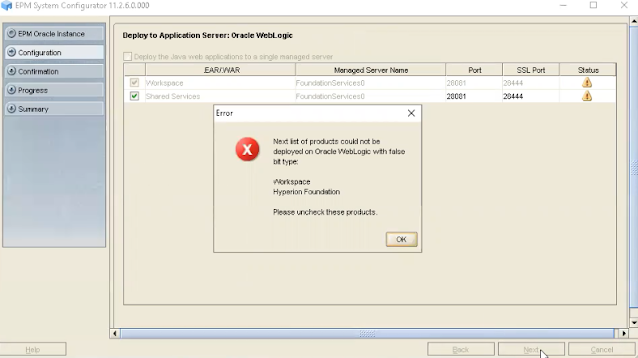 (Trying to redeploy other web applications, such as Calculation Manager, yields a similar error)

Given this is happening in a throwaway sandbox that isn't customer-facing, I opted not to open a Service Request on this.

Other weird errors encountered during the in-place upgrade:

I need to move on to other matters of investigation now, so I destroyed the VM to free up space for the next one.
It was an interesting exercise.  I'm encouraging all my peers to back up the Middleware folder (minus user_projects) prior to applying the quarterly Oracle CPU Middleware patches.  I think I still have some of my hair remaining....
Posted by Dave Shay at 7:08 PM 10 comments: