I did a near-full stack implementation in a sandbox for Oracle EPM / Hyperion 11.2.2.0 in Red Hat Enterprise Linux ("RHEL") 7.  Essbase, Planning, CalcMgr, Foundation, and EAS all seem to be working fine.  HFM of course is not available for Linux at this time.

FDMEE, however, has multiple issues and does not work.  In short, Oracle needs to issue a patch.  Clarification: this post is about the Linux edition only.  The Windows edition does not have these issues.

A patch also needs to be issued for Analytic Provider Services ("APS").  I managed to get it to work by copying over aps.ear from my 11.2.1.0 sandbox.  Unfortunately, this solution won't help you if you didn't grab 11.2.1.0 from Oracle eDelivery before it was removed.  So Oracle will need to issue a patch for 11.2.2.0 APS as well.

I've downloaded 11.2.2.0 for Windows and will check if that version also has the same issues.

Here's the initial symptom with respect to FDMEE:

I had deployed it to WebLogic and started it.  It binds to port 6550 as it should: 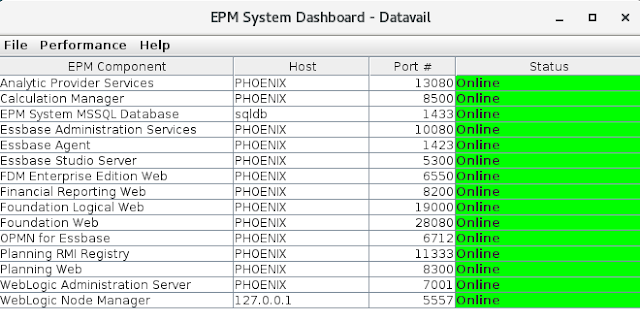 Digging digger, I found multiple problems behind the scenes.  The problems are in two major areas:

I had to do quite a bit of "surgery".  At this point, 2 of 3 problems as previously reported by the validate.sh utility are now fixed.

So how did I manage to get to this point?  Hours of troubleshooting and experimentation.

Let's first address fixing the lack of SNP_* tables in the FDMEE database schema.  When we run the "Configure Database" task for FDMEE, here's what happens behind the scenes.  We can reproduce the issue at will by running the back-end utility manually.

Side note: I edited the utility to add echo statements for "Finished XYZ" so I could see which step was throwing the Java stack trace error.

The assertion that the supervisor password is blank is not true.  The script follows the same format used in 11.1.2.4, whereby Supervisor's userid and password are encrypted and hard-coded within the script.

In crawling through the various jar files in 11.2.2.0, I found the offending class oracle.odi.setup.suppoort.MasterRepositorySetupImpl is located within Middleware/odi/sdk/lib/odi-core.jar.

So I backed up Middleware/odi/sdk in 11.2.2.0 and then copied over the whole directory structure from 11.2.1.0.  Re-ran the utility in my screenshot above, and now all of the SNP_* tables are present.

So in the EPM 11.2.2.0 Linux installer, the subdirectory "odi" is apparently packaged incorrectly and we need a patch for that.

My follow-up post concerns a myriad of problems within WebLogic.